How do you determine the discount rate for your analysis? An easy question to ask and a somewhat tricky one to answer.

What is the discount rate?

So this is simple enough: instead of taking a dollar value as of today, let’s say $100.00, and growing it into the future to its projected future amount, let’s say $105.00 assuming a 5% annual growth rate over that year, we take the future projected $105.00 amount and reduce it (discount it) to its equivalent value in today’s dollars, using the 5% annual growth rate, but applied in reverse.

The basic math is shown here:

How should we think of the discount rate?

To complicate matters, there is unfortunately more than one way to think of the discount rate.

The first way I like to explain the discount rate is that it reflects your level of confidence in the occurrence of a projected future dollar value ending up being exactly what you are projecting it will be sitting here today at Time Zero.

For instance, if I have total and absolute confidence that if I lend a trustworthy family member $100.00 today, and we agree that he will pay me 5% interest annually, and that the money is due back in one year, then in theory my discount rate on the assumed future $105.00 return amount to me should be very, very low.

The question becomes: how low? As low as 0%?

Perhaps not, because even if you feel there is no chance whatsoever that your relative will not make the $105.00 payment back to you in full and on schedule, because we live in an inflationary environment, at a minimum, we should set the discount rate equal to the assumed annual rate of inflation over the year during which the money will be borrowed.

If we had used a 0% discount rate, we would be saying that the $105.00 amount one year from today would have exactly the same purchasing power of $105.00 today, i.e., that there would be zero impact from inflation on the dollar amount. We know for a fact that this is not reasonable.

Thus, even with an extremely high level of confidence that a projected value will end up being the nominal value we anticipate (and show on the spreadsheet) that it will be, we should still discount it by at least the rate of inflation.

As with real estate itself, no two real estate investments are identical, so we are starting off with the inability to make a pure and perfect comparison of the subject investment and an alternative to it.

Let’s use an example of two single-tenant Starbucks retail properties, both with drive-through windows, and both absolutely the same in every other possible way, including gross sales receipts, operating expenses, and priority of lease payment guaranty by Starbucks corporate.

Now, assume that our relative owns one of them, which he purchased using all cash 3 years ago. Over beers at a summer BBQ our normally tight-lipped relative reveals he paid $1MM for it, and it has returned to him a constant 8.00% annual return on his cash investment over each of the last 3 years. He also says that sales for the current year (year 4) are right on track to return a perfect 8.00% again.

If this is in fact true, then he has achieved 8.00% annual growth on his capital. So if he were to want to discount the anticipated total Year 4 net cash flow as of year end, then at the very beginning of Year 4 he would theoretically apply an 8.00% discount rate to the Year 4 projected amount, because the rate at which his money is growing is, in retrospect, the same exact rate at which he would contract it back to today’s dollar value.

Thus, assuming (while still on the unicorn) that all else is equal between his Starbucks property and the other one in question, and assuming that we were to be able to acquire the other Starbucks for exactly $1MM in all cash, our discount rate for that investment should be exactly 8.00%.

OK, dismount the unicorn now, because we need to ask…

Should the discount rate in fact be constant for every year?

First of all, if gross sales receipts were flat at the Starbucks, we would probably be wondering if they were doing a good job operating, because we would want sales to grow year over year.

Assuming that sales were to have grown to produce these cash on cash returns instead:

assuming all else equal for Year 4 (which is a heck of a big assumption), we would probably select a Year 4 discount rate higher than 9.25% because we would be expecting a higher growth rate on our cash investment for Year 4 than we achieved in Year 3.

Certain instances would be more suited than others to the extra work of applying individual, potentially unique discount rates to each year’s cash flow stream. For example, let’s say we are developing the Starbucks, and it will take us 12 months to design, entitle and build it. Are the spending of these dollars (i.e., the negative cash flow stream) relatively more certain than the Year 3 cash on cash return projection? Most would say absolutely, because we are currently sitting here signing engagement letters and contracts with attorneys and consultants and a contractor for the payment of the development costs, whereas we are not getting written promises from all of the Year 3 customers saying that each of them will be in at least once a week to buy a $5.00, 500-calorie beverage.

This brings forward the notion of…

What percentage increments should I use?

Unfortunately this is another key question to which no one can give a definitive answer.

Nobody “knows” this. If they did, they’d be a trillionaire. All we can do is agree to either choose to reflect the increasing uncertainty in the increasingly-distant sets of cash flows, or agree to choose to not do so for the sake of simplification of our analysis (i.e., use a constant discount rate for the entire projection).

Again, at a minimum, I should reflect inflation in my selected discount rate. Above and beyond that, I can build in additional basis point premiums and subjectively assign them to realities that impact my level of certainty in the cash flows: the economic climate, place in the real estate property cycle, individual tenant strength, etc.

I am sincerely sorry that I cannot just answer the question of this post by directing you to discountrate.com (which ironically is for sale… which proves my point that if someone knew what to tell you, they would have a site up and be selling you your definitive, reliable discount rate for all of your investments). 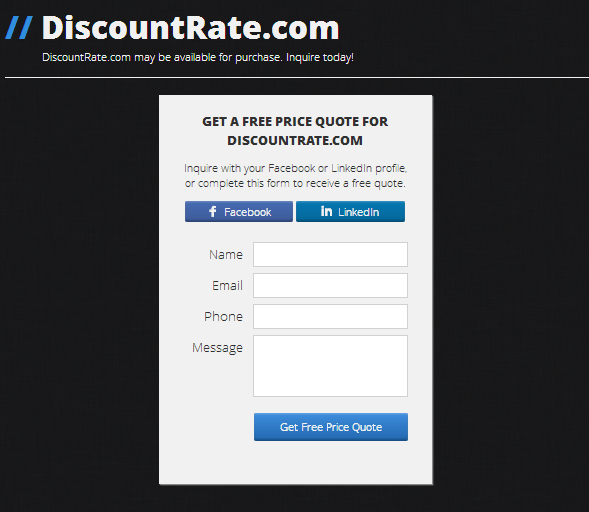 Don’t you think Goldman Sachs would have owned this a long time ago if they knew what to tell people?

Nonetheless, here are some rules of thumb, for which there are going to be individual reasons specific to your property to NOT use these exact amounts

Speculative development of a retail plaza – 20%